The Ford Ecosport has only been released in the United States since 2018, so it hasn’t had many makeovers. That said, it’s still had a decent number of different OEM tire and wheel combinations.

Over the three years of the US-production of the Ecosport, Ford has only used two different OEM tires — the Bridgestone Ecopia EP422 Plus and the Continental ContiProContact. As far as OEM wheel options go, there have been five different choices ranging from 16” to 17” in diameter.

The Ford Ecosport has only been released in the US since 2018, but it can still be difficult to find the OEM tires and wheels that came on it from the factory. If you’re in need of replacement OEM wheels and would like to know which tires came on your Ecosport, we’ve got you covered. Consider this guide your one-stop-shop when it comes to finding the most comprehensive information about OEM tires and wheels for the Ford Ecosport.

All of the information that you find in this article has been thoroughly vetted to ensure accuracy. Part numbers and pricing on the OEM wheels have come directly from Ford themselves. Information about the OEM tires has been collected from various sources including automotive experts and Ecosport owners. 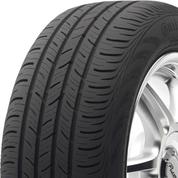 Since the Ecosport has only been available in the US since 2018, there haven’t been too many wheel and tire combinations to keep track of. But small numbers of each can quickly turn into a headache when you’re trying to figure out which ones came on your Ecosport.

That’s where we come in! To help narrow it down and provide you with all the information you’re looking for, we’ve created this complete guide on Ecosport OEM tires and wheels. Thankfully (for you and for us!), there isn’t too much information to sift through.

In fact, Ford has only used two tires as the OEM option on the Ecosport, and just five different wheels up to this point. Ecosport tires also only come in two sizes, and Ford used both of the ones you’ll find in this guide in each size, so the OEM tires are lumped together in one small group.

Similarly, all five wheel options were also offered on nearly all of the models and trim levels of the Ford Ecosport between 2018 and 2021, with one exception. That said, the wheels are discussed together in one group as well, but you’ll have no trouble finding all the information that you need.

Let’s get into the good stuff, here are all the OEM tires and wheels that have been offered on the Ford Ecosport during its brief production run in the US.

Ford typically uses only three major tire brands for the original equipment on its vehicles — Continental, Bridgestone, and Michelin. Even if you don’t know much about tires, you’ve probably heard of these three brands. But even if you haven’t, let’s suffice it to say that they’re arguably three of the top-regarded tire manufacturers in the world.

And Ford stuck to it with the Ecosport, offering only two tire options from the factory. The first of which, and the one that was put on the vast majority of Ecosports as the OEM tire, was the Bridgestone Ecopia EP422 Plus. This all-season grand-touring tire offered Ecosport owners a comfortable, long-lasting ride and a 70,000-mile tread life warranty right off the showroom floor.

Through the use of Bridgestone’s NanoPro-Tech — which reduces rolling resistance while simultaneously enhancing traction in dry, wet, and snowy conditions — the Ecopia EP422 Plus is a tire you can trust. It provides consistent and reliable traction year-round and in just about all weather conditions. The sidewalls of the Ecopia EP422 Plus that came on the Ford Ecosport are made with Bridgestone’s Fuel Saver compound to enhance the fuel economy of the Ecosport even more.

This is a great overall tire that Ford included as the most common OEM option on the Ford Ecosport, and owners will be happy with Ford’s choice for years to come. You can buy the Ecopia EP422 Plus for between around $130 - $175 each, depending on which of the two OEM sizes your Ecosport has on it.

Some specifications may vary based on the exact tire size, which could differ between models and trim levels.

As mentioned above, Ford typically sticks to some of the best tire manufacturers in the world when it comes to OEM tires on its vehicles. For the Ecosport, Ford neglected to go with a Michelin as the second OEM option. Instead, they offered some Ecosport models with the Continental ContiProContact all-season tire.

The ContiProContact is touted as one of the best tires in its class, especially for a car like the Ford Ecosport. It’s long-lasting, comfortable, and more than capable. This tire was originally designed to be used on European sports cars but has since been adopted by various automakers and auto enthusiasts around the world due to its performance and reliability.

The ContiProContact has an all-season tread design and a special compound that offers dependable traction in just about all weather conditions, including light snow. The tread compound was also designed to provide consistent traction under aggressive driving and high-speed cornering, so it’s more than capable of handling what the Ford Ecosport can throw at it.

With Continental’s proprietary PROactive Edge Technology, the ContiProContact has more than 800 edges expertly placed throughout the tread design. These edges provide traction, reduce the risk of hydroplaning during wet conditions, and also transfer energy across the tread to reduce road noise and enhance function.

All of that is capped off with an astounding 80,000-mile tread life warranty that sets the ContiProContact apart from most of the tires in its class. No matter which tire came on your particular Ecosport — the above Bridgestone or this Continental — you’re situated with a fantastic OEM tire. The ContiProContact is available for purchase for around $120 - $220 each, depending on which size you need.

Some specifications may vary based on the exact tire size, which could differ between models and trim levels.

This is the most common wheel found on the Ford Ecosport and can be found as the OEM wheel on any Ford Ecosport that’s been released in the US, depending on the options that were selected. The 16x7 5-spoke wheel is finished in a charcoal (dark grey) color to add some unique appearance to the Ecosport instead of the standard silver wheels of most vehicles.

This wheel is included on both the 1.0L EcoBoost 3-cylinder and 2.0L Duratec 4-cylinder models from 2018 through 2021. It can be found on the S, SE, SES, and Titanium models, as well as both FWD and AWD vehicle options. Every Ecosport that has been produced could have come from the factory with these.

As the basic 16” wheel option for every year and model of the Ecosport, this is the cheapest OEM wheel that you’ll find on this list. You can buy this wheel for about $400 each.

Even though Ford typically loves their 5-spoke wheel designs or at least some rendition of the 5-spoke design, they decided to up the ante and offer Ecosport owners a different option. The 7-spoke aluminum wheel was born, finished in silver, and offering a bit more flair than the standard 5-spoke wheel.

This wheel was offered as an optional OEM wheel on every year and model of the Ecosport as well for any owners who decided to add it as an option. This includes the S, SE, SES, and Titanium models from 2018 to 2021, no matter if they were powered by the 1.0L EcoBoost 3-cylinder engine or the 2.0L Duratec 4-cylinder engine.

With the upgraded 7-spoke design, these wheels are far more expensive than the 5-spoke model. The 7-spoke wheels can be bought for about $595 each.

As an optional upgrade for every model of the Ecosport, any model or trim level could have been outfitted with these black wheels from the factory — though they weren’t as popular as the two choices above. That said, these wheels can be found on any Ford Ecosport on the road today, from 2018 - 2021 model years. This includes Ecosports with either the 1.0L EcoBoost or the 2.0L Duratec engines, as well as all S, SE, SES, and Titanium models.

As the first 17” wheel on this list, it is much more expensive than the base model 16” 5-spoke OEM Ecosport wheels seen above and goes for about $532 per wheel.

The last OEM wheel that has been offered as an option on every model of the Ecosport that has been released, this 17” 10-spoke aluminum wheel had a different design than any of the others. This particular design featured 10 spokes situated in such a way as to create 10 holes with somewhat rounded edges, which differed from the similarly described wheel that you’ll see below.

Similar to the other wheels that you’ve seen so far in this guide, this 17” option was available as an OEM upgrade for every year and model of the Ecosport. So these were offered on 2018 - 2021 Ecosports no matter which engine they came with or whether they were the S, SE, SES, or Titanium model. These wheels were more common than the black 17” wheels seen above.

With a bit of a more extravagant and intriguing design than the more basic 5-spoke 17” wheel above, this OEM Ecosport wheel costs a little bit more and is available for about $550 each.

Although the wheel’s brief description is nearly identical to the one above, it’s not the same wheel just recolored in a dark charcoal finish. In fact, all three 17” wheel options for the Ecosport were totally different designs, not simply just recolorings of the others. These wheels were designed with 10 spokes, but they were used in a way to create more angular openings that alternated between being concave and convex.

This gave Ecosports a distinctive look unlike anything else that Ford had released. However, these wheels are no longer available as OEM options. They were only offered on 2018 - 2020 model years, although they were still available for all models and trim levels during those years. This means they can be found as the OEM option for 2018 to 2020 models no matter if the Ecosport came with the 1.0L EcoBoost or 2.0L Duratec engines. They were available on all S, SE, SES, and Titanium trim levels.

With its much sharper and more angled edges, this wheel offers a bit of a cleaner look to the Ecosport compared to some of the other options, making it just a bit more expensive. It goes for just over $570 each. 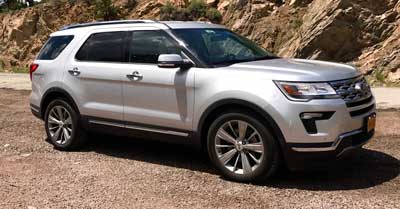 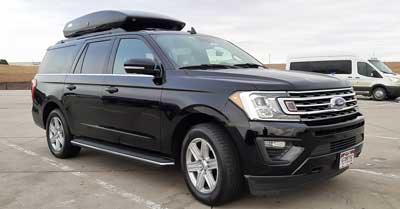 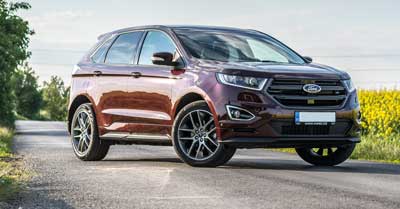 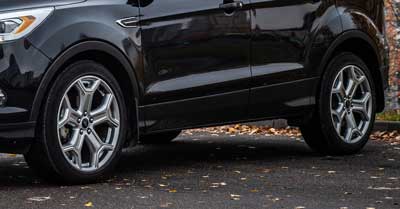 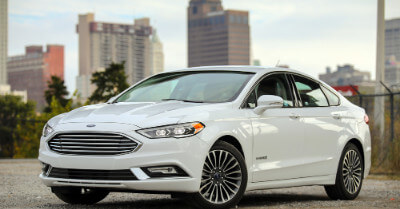 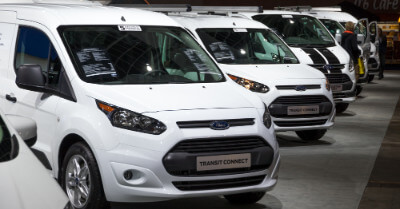 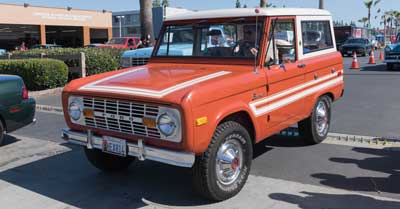 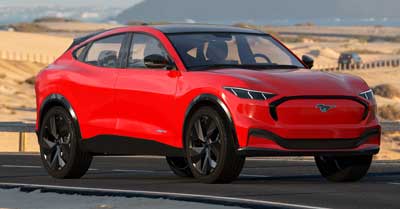